I was all suited up to start installing my 1x4 craftsman door casing and when I realized a slight problem: the door latch would strike the trim. The standard plate included with the lockset is designed for thinner casing. As you can see below it is quite a bit short from the edge of the trim. 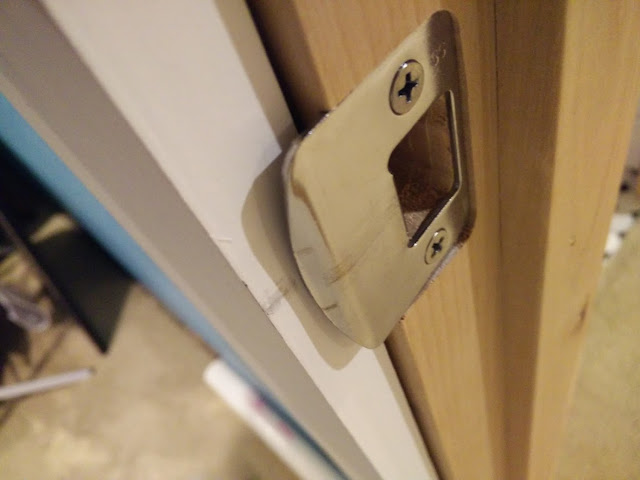 And from another angle you can see the contact point. Of course this would quickly eat away at the casing. 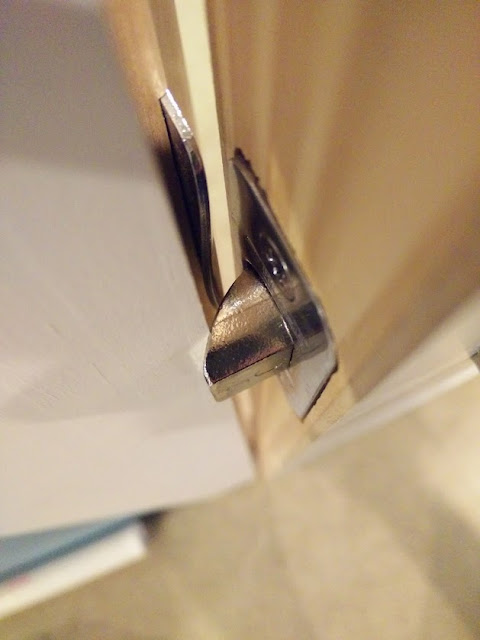 The solutions I found online include setting the trim with a large reveal to provide clearance, cut a bevel on the trim, or purchased extended lip strike plates. I would need to set the reveal to 7/16" to clear the latch, which is not viable since there isn't enough jamb to nail into at that dimension. I guess some are installing without nailing into the jamb which seems like a bad idea. I don't like the idea of cutting the trim so that option is out, leaving me with the extended lip plates.

I did some searching and while I found some extended strike plates for sale, I couldn't find anyone talking about this problem that is related to craftsman trim. While search for "craftsman trim extended lip" I couldn't find a single photo or mention of this issue. At this point I started wondering what I was doing wrong.

The don-jo (that's really the name) plates from in various sizes. The two sizes that would work for me are the 2" (measured from the back of the mortise) or 2 1/4". With the 2", the lip extends to almost exactly the edge of the trim. The curvature of the plate would require about a 3/16" reveal, which is what I wanted anyway. The 2 1/4" of course extends 1/4" further, allowing a smaller reveal but sticks out a bit. To complicate matters, my doors were morticed for round corners, or radius, so I need to order the rounded corner versions, which are harder to find. For the front door they don't make a rounded corner so I'll need to either grind a square or chisel, ugh.

I ordered the don-jo plates from a company in Spokane. The other brand is Deltana, which I ordered for the front door since don-jo didn't have a bronze finish. There are not a lot of places selling these plates. Amazon carries some but they are for square mortices. Actually it felt good that I was able to buy something not from Amazon for once!

To make things more interesting, the 1x4s I received were not 3/4" thick, but more like 5/8", so the 2" lip plates provide plenty of clearance. The exception is where the drywall stands proud of the jamb (happens a lot in my house because walls typically lean in or out and I set my doors plumb). In this case the lip plate just barely clears the trim. On this door there is a 1/8" gap between the trim and drywall -- caulk to the rescue! 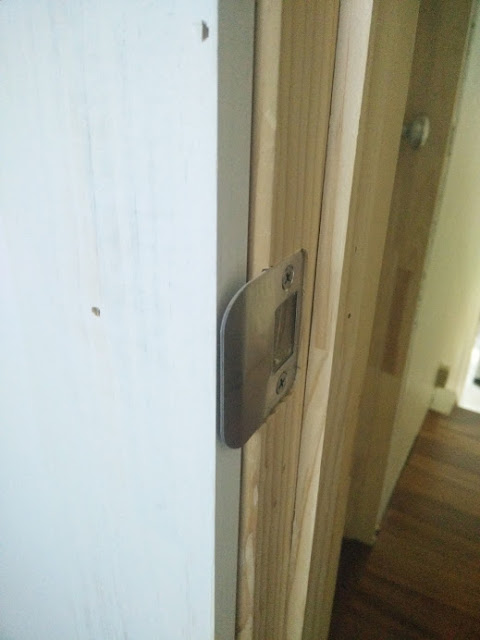 Overall the don-jo plates seem to be just fine. They are not as thick as the Schlage that came with the lockset but the satin steel finish matches the door knobs decently. They don't curve as much as the Schlage, which is a shame since that leaves a gap between the trim and plate.